For a small church Lecropt has many famous and beautiful stained glass windows. Of course the photographs do not do full justice to these interesting windows. If you wish to view them at first hand and in glorious colour please contact the Minister so that we can arrange access at a mutually suitable time. 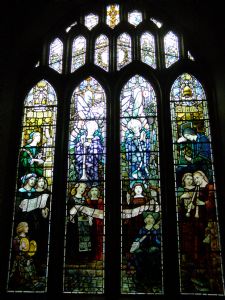 This window was the gift of Lawrence Pullar in 1911. It was designed by Alfred Webster not long after he finished his studies at Glasgow School of Art and only a few years before his premature death in the trenches of Flanders in August 1915. The window has four lights set within Perpendicular tracery, which is more elaborate than that of the windows in the nave, and contains all the hallmarks of Webster’s style. Its subject is the praise of God in music, based on Psalm 150 “Praise God in His sanctuary”, which is illustrated by an imposing composition of musical figures extending across all four lights. 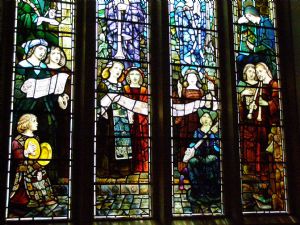 Particular details of note are the innocence in the face of the boy cymbalist; the long delicate hands of the figure playing the small portative organ; the five tuned gold bells; the plainchant manuscript with its ancient form of notation; the rich brocades of the costumes; the crimson flames on white candlesticks; the songbirds beneath a golden bell and the enigmatic, watching faces. 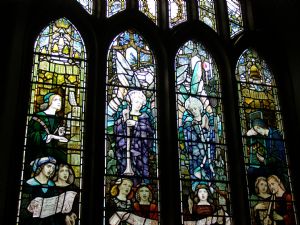 The authenticity and accuracy of the manuscripts and instruments are evidence of Webster’s detailed knowledge of Christian art. Another feature of his work can be seen in the tiny cameos of minute detail almost hidden in the overall grandeur of the whole window. See if you can discover the blue songbird, the tiny harpist; a slain dragon; a face embroidered on a tunic; miniature swords and droplets of blood, and melting candle wax.

The overall result of this example of Webster’s craft is a powerful and inspiring window, which admits and filters the western light and, through its texts, fulfils one of the prime functions of religious stained glass, that of glorifying God. 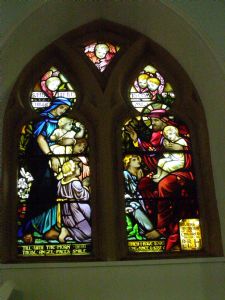 The second window by Stephen Adams commemorates the five children of the Rev David R and Mrs E L Henderson. David Henderson was the Rev Peter Young’s successor at Lecropt, and served as Minister between 1893 and 1945. The Henderson’s experienced great family tragedy as their children died in infancy and therefore the window, which is set above the vestry entrance in the north wall, has as its theme Christ’s instruction to “suffer the little children to come unto me”. It depicts five children in prayer with their parents; their dress is biblical but they clearly represent the Henderson family. It is a calm, still and peaceful scene, with only the raised arm of one of the children suggesting any movement in the tableau. 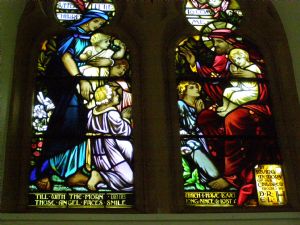 The youngest child on his father's knee is looking intently out of the picture at those who look into this sad but lovely window. The colours are rich with deep reds and blues contrasting with the paler shades of mauve, grey and green. Smiling cherubs survey the scene from the cusps of the lights and, as a postscript, at the base of the window there is a moving quotation from John Henry Newman’s hymn “Lead Kindly Light”:

“Till with the morn those Angel faces smile

That I have loved long since and lost awhile”. 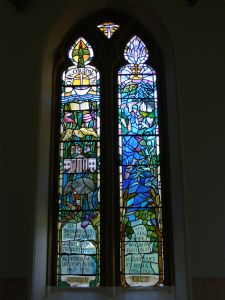 This window, in the north wall of the Nave, was designed by Roland Mitton. It commemorates DR William Stewart and his wife Wilma and was installed and dedicated in 1990. Dr Stewart was minister at Lecropt from 1967 to 1978, having been previously Principal of Serampore College in India. 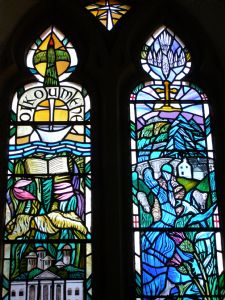 The two lights depict these two aspects of Dr Stewart's ministry; their themes are Unity and Mission, ideals which were integral parts of the life and work of this distinguished scholar and missionary. 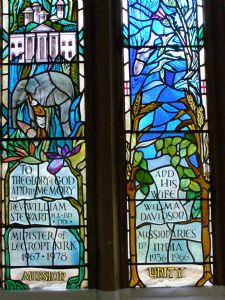 The window's legend -the        explanation of its content and symbolism - is explained in a leaflet produced to mark the dedication of the window.

Photographs are © C M Britchfield. The notes are © Lecropt Kirk Congregational Board and are based primarily on: