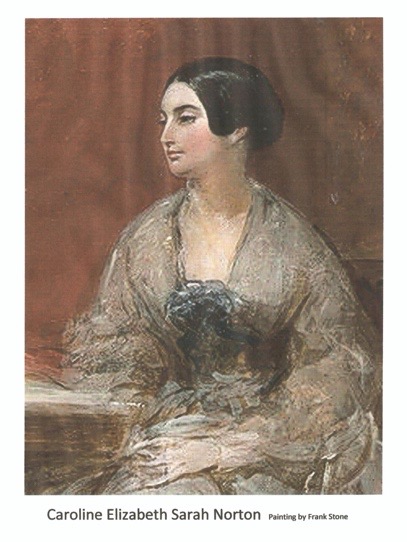 If you have been inside Lecropt Kirk and seen the marble portraits in the "Laird's Loft there you will see Caroline Norton.

Caroline Sarah Elizabeth Sheridan was born on 22nd March 1807 in London to the sound of coughing.  Her Father, Tom was a consumptive and would die aged 42 on the Cape.  Tuberculosis was the blight of the family.  Caroline was the third of seven children born to a famously beautiful woman also named Caroline.

Her grandfather, Tom’s father, was the famous playwright Richard Brinsley Sheridan: the author of “School for Scandal” and “The Rivals”.  He was a loveable Irish rogue who was MP for Guildford and part owned Drury Lane Theatre. Sheridan the actor and playwright was a favourite of King George 1V.

When Tom Sheridan died in November 1817 his wife Caroline was left with 7 children to support.  She was granted a small pension and allowed a “Grace and Favour” home in Hampton Court, all courtesy of King George IV.

Because the family were so high up in society, but cash poor, it was important that Mrs Sheridan arrange financially secure marriages for her three girls.  The four boys either had naval careers or diplomatic careers until tuberculosis struck.

Caroline was spotted by George Norton a non-practicing lawyer who was the younger brother of Lord Grantley and heir to the Grantley estate.  They married on 30th July 1827 at St Georges, Hanover Square Mayfair.  This was at a time when a wife gave all her possessions to her husband upon marriage: property, jewels, clothes; and then became a non-person who could not sign any legal documents.  Effectively she was a chattel to her husband.

Caroline was not keen to marry George as he was rather dull, slow and lazy. His family did not like Caroline as she was too outspoken for their taste.  George turned out to be a bully, a tyrant and a liar. He mentally and physically abused Caroline on many occasions and caused her to miscarry one child.  They had three children Fletcher, Brinsley and William.

George did not approve of her popularity. She always stole the attention at a party or gathering and had many influential friends including Lord Melbourne who later became Prime Minister and a confidante.  Caroline was an author and writer, she wrote novels and poetry and was very successful, she moved in very artistic circles and had many accomplished and influential friends.

George Norton encouraged Caroline to entertain her friends so that he could benefit from their friendship.  Lord Melbourne, who remembered Caroline’s grandfather Sheridan was a regular visitor and he recommended George for suitable employment: he became a magistrate.  Caroline became besotted with Melbourne who was a Tory, while she was a whig and 28 years his junior.  George Norton sued Lord Melbourne for “Criminal Conversations” with his wife.  In other words he sued him for £10,000 for having an affair with Caroline.

The trial was the trial of the century, but Caroline was not allowed to attend and defend herself.  Lord Melbourne won the case as there was little evidence against him and what evidence there was came from servants who had been bribed by George Norton and his brother Lord Grantley.  Lord Melbourne got away with it, although the scandal almost brought down the government. Caroline was branded a scandalous woman, a description that haunted her all her life.

George and Caroline separated after the trial in 1836.  George took the children to live with his mistress in Scotland. The children were his property, the youngest was not yet 2. Caroline was bereft, but she did not return to him even though that was the only apparent way of seeing her children again.  She did not see them for 7 years.  George taunted her at every turn with her children.  He would say that she could see them and then cancel the meeting at the very last minute.  He took her literary earnings away from her and set detectives to prove that she was an adulterous wife and therefore not fit to have the children.  They found no proof.

Her only redress during these years was the fact that George her husband was responsible for her debts, as she was his chattel and so she could send any bills on to him for payment.  He did not like to pay and was taken to court by Caroline’s creditors on several occasions.  George even put notices in the papers stating that he was no longer liable for her debts, but in the eyes of the law he was.  During these years she received a great deal of support from her siblings and her Uncle with whom she lived as it was not good form to be a single lady and live alone.

Caroline was a fighter and had to work her way back into society, so she worked hard at her writing in order to establish her career.  She could not afford to divorce George.  He always deprived her of money and would not come to a financial settlement with her. She decided that if the law was against her then she would have to change the law.  Being a woman she could not address Parliament but Caroline wrote pamphlets and sent them to MP’s.

She used one of her influential friends, Sir Thomas Noon Talfourd, a politician and author,  to present to Parliament the Child Custody Bill which allowed divorced women to petition to keep their children until they were 7 and subsequently have access to them.  It was a tentative start to the laws that we have today.  On the third reading the Act passed into law in July 1839.

Caroline’s youngest son William died in 1842, he had been left by his Father in the care of servants who had let him go horse riding by himself.  He was only 9 and fell off the horse and though his injuries were slight he developed lockjaw and died before Caroline could get to him.  This situation seemed to thaw relations between Caroline and George and she did get limited access to her other two sons but no access to George’s fortune.

Caroline modelled for the fresco of Justice in the House of Lords by Daniel Maclise, who chose her because she was seen by many as a famous victim of injustice.

Caroline’s next challenge was to set about Parliament again and she campaigned for the Matrimonial Clauses Act.  This was passed in 1857 and made divorce more affordable amongst other things.  Also the Woman’s Property Act passed in 1870 which allowed women who married to keep property that they owned upon marriage. (Some unscrupulous men were tricking wealthy ladies into marriage and then disappearing with all their wealth).

Caroline’s son Brinsley had married an Italian peasant girl and lived in Capri.  They had two children, Richard and Carlotta.George had disowned his grandchildren but ironically when George died in February 1875 just a few months before his brother, it was Richard that inherited the Grantley fortune and became Lord Grantley.

Caroline never divorced George Norton and remained married to him for 45 years.  On 1st March 1877 she married a lifelong friend Sir William Stirling Maxwell.  His first wife Lady Anna had been a close friend to Caroline for several years but died in 1874 from a terrible accident: she had an epileptic fit and fell into the fire. Her arm was badly burned and she had to have an amputation, but seventeen days later she died. Anna was laid to rest in the crypt of Lecropt Kirk.

William was 10 years younger than Caroline and through her most tormented years he had been a calming influence and gave her good solid advice.  They married in her sitting room at Chesterfield Street in London, she was 69 and he was 59.  Then began a blissful marriage for Caroline.  She longed to go to Keir in Scotland near Bridge of Allan, William’s home, but she was not well enough to travel.  Her health improved and she was able to move between his house at 10 Grosvenor Street and her own in Chesterfield Street.  In early summer Caroline was taken ill again, and over a few days she declined.  On 15th June 1877 she died.

She had been married to George Norton for 45 years and to Sir William Stirling Maxwell for only 3 months.  William only lived for another 7 months, as he died of Typhus in Venice after escorting Carlotta, Caroline’s granddaughter, back to Capri.  Caroline’s oldest son Fletcher had already died in 1859 of tuberculosis and her remaining son also died of tuberculosis only 5 weeks after Caroline died in July 1877.

The reform work that Caroline undertook has helped so may victims of abusive partners, but she did not benefit from the changes herself as George kept the children in Scotland where the laws did not apply.  She wanted to change the lives of women of the future so that no one else would have to go through the torment that she had been subjected to for 45 years.

Caroline eventually made the journey to Keir:  she lies with William Stirling Maxwell and his first wife Anna in the Crypt at Lecropt Kirk in the corner of the Keir Estate.

Caroline was a brave and talented woman and a forerunner of the suffragette movement. Without principled people like her who fought to right injustices the world would be a poorer place. Caroline is little remembered.

To read more about her, two books are available:

Both are a good read, the first is my preference. Both can be purchased on eBay.